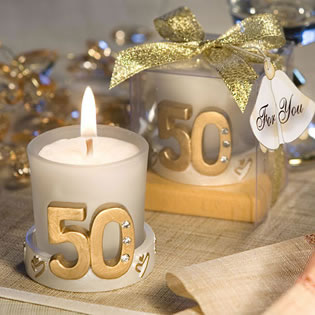 Celebrate your 50th in style with our frosted glass anniversary candle favors!

Celebrate your 50th in style with our frosted glass Golden Anniversary Candle Favors. Each of these spectacular candle favors is composed of a golden poly-resin base that features a rhinestone-accented number "50". Each of the Golden Anniversary Candle Favors is packaged in a clear top, gold bottom box and finished with a matching gold ribbon. For an added touch of class, these anniversary favors feature a wedding bell-shaped "For You" tag.

This product will be shipped from New York. See below for transit time (in business days) for Ground Service. Transit times do not include order processing time. See shipping info for details.

“We used these at our 50th Anniversary celebration along with the 50th Wine Stoppers to match. We used the candles to hold the seating cards. They did come packaged with a bow, but we removed. They looked beautiful!”

“I ordered these for a 50th wedding anniversary party and I was very pleased with my purchase. They were shipped correctly, on time and well-packaged. They come with little "for you" tags and are individually wrapped. None of them were damaged. Our guests loved them!”

“These candles arrived in excellent condition. Pleasantly surprised. These candles were very nice for the price. You will not be disappointed. Everyone loved them that attended the celebration. I would definitely shop favorfavor again.”

“I ordered this item to give out as a favor for a 50th birthday party celebration. Everyone loved them. They were simple yet nice. Came wrapped in a box with bow - nice touch. Came quickly when ordered. Would use company again.”

“I enjoyed my candle favor, my guests really like the presentation of the candle favor. I gave it away as a prize when one of the guest won a game at the party that I previously host. I like the way the delivery for this candle came right on time. I give it two thumbs up!!!”

Good thank you for 50th anniversary 4

“Good inexpensive favor to give guests attending 50th anniversary. Don't order special tags. You have to assemble yourself. "For You" tags that come with candle are sufficient.”

“FavorFavor did a great job with my order! I had a concern that the order might not arrive in time (to Hawaii) for my parent's 50th Wedding Anniversary. I was also concerned no one would respond to my email; but Linda attentively responded and assured me that the candles would arrive on time. Sure enough, despite originating from New York, they arrived exactly on the day she said it would. The candles were lovely and my parents had a wonderful party. I highly recommend FavorFavor and will undoubtedly keep them in mind with my next big event. Thanks and great job!”

great product for the price 5

“Great product for the money excellent gift idea for 50th present,guest loved them”

“The favor came in quickly. They also look very nice and the price was the lowest I could find.. Thank you,”

“This is a nice favor with good quality.”

“I'm 100 percent satisfied. It came on time and was beautifully packaged. Thank you, and I recommend favor favor.”

“I ordered the golden anniversary candle favors for my parents 50th wedding anniversary party. They arrive quickly and in perfect condition. They were perfect for the occasion.”

“Guests enjoyed receiving this candle as a party favor.”

“This was so cute with the heart base and rhinestones that I plan to actually use it for table decor on a heart shaped mirror for my parents 50th wedding anniversary party. Thanks for having such a wonderful product at such a reasonable price. I will shop again with you soon because my daughter is getting married next year!”

“This also added a nice touch to the table. Good quality.”

“I WAS SO HAPPY WITH MY 50TH.ANNIVERSARY CANDLES EVERYONE COMPLETED HOW BEAUTIFUL THEY ARE. I HIGHLY RECOMMEND THIS FAVOR & THE PRICE WAS JUST RIGHT. THANKS CAROL”

“I was very pleased with these and cant wait to use them at my parents anniversary party!”

Customers also shopped for these favors...