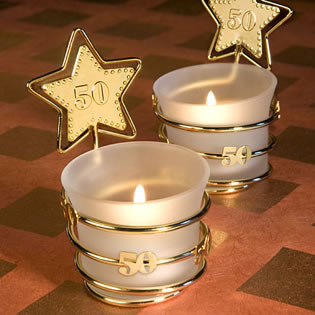 You have been together through it all, so celebrate this momentous occasion with our 50th anniversary candle favors. Beautifully crafted, these unique favors will complement any décor. The frosted white glass holder embraces a white votive candle and rests within a coiled gold metal base that forms a gold star. Enhanced with gold '50' accents and a gold star charm at the top, the 50th anniversary candle favors are sure to light the way to a happy future together. Measuring 3 .5" by 2 .25", the candles are individually packaged in a white gift box.

This product will be shipped from New York. See below for transit time (in business days) for Ground Service. Transit times do not include order processing time. See shipping info for details.

“We are very pleased with the 50 Anniversary Candles. They are adorable with the rest of our decorations.”

“These candle holders are beautiful. I am very satisfied with them. They arrived quickly and are well worth the cost.”

“Loved them. Good quality. Better than I thought they would be for the price.”

“They were ideal for the occasion and our friends liked them. Thanks for making our event pleasant with your gifts.”

“VERI NICE FAVORS FOR 50TH ANNIVERSARY, VERY PLEASE AND WAS SHIPPED RIGHT AWAY THANK YOU”

“These candles are very nice and looked great on the tables. The quality and price are a great value.”

“I ordered these candles for my parents 50th Anniversary party and they looked wonderful. They are just the right size to place a couple around a dinner table centerpiece and also a single one on a cocktail table. The only downside is that they come with tea light candles which are too small to last for a whole evening. I bought bigger votive candles to replace them. Other than that, I'm a satisfied customer.”

“Excellent product worth the money arrived on time guest loved them as parting gifts!!”

“It was great, everyone loved them, in fact i was short.”

“YOUR SERVICE WAS PERFECT. MY PURCHASE AWAS RECEIVED ON TIME. EVERYONE LOVED THEIR GIFT. THANKS.”

“candles were exactly what i was looking for. purchased these for my parents party. they were delivered on time and were exactly what i wanted. Only 1 box came damaged so i kept that one. i wrapped each one individually with pretty foil wrap and personalized ribbons. I'm sure my guests will enjoy these!”

“Very satisfied with the order and delivery time.”

“This is a nice favor with good quality. I would purchase these again.”

“My candles were beautiful everyone loved them and they arrived on time.”

“THANK YOU SO MUCH FOR MAKING OUR 50TH ANNIVERSARY SUCH A PLEASANT DAY WITH THESE FAVORS. EVERYONE COMPLIMENTED ON THE CANDLES. WE REALLY APPRECIATED THE EFFORT RHONDA PUT INTO THIS ORDER, AS I FORGOT TO TELL HER WHEN WE NEEDED THEM BY. THANKS TO ALL @ FAVOR FAVOR.”

“All the guest were amazed with the quality. Everybody liked it. Great favor idea. We decorated the room with them first, then the guest took them.”

“I'm using these as place card holders as well as favors. I ordered battery operated candles on timers which change colors--instead of fire.Should be fabulous.”

Perfect Favor to Have 5

“These candles are the perfect favor to have for a 50th celebration. I purchased these candles for my upcoming 50th birthday and are very pleased with them. I know my guests will enjoy them too. I took the candles out of the box and put each of them into a clear cellophane plastic bag and tied with curling ribbon which made the candles a nice presentation. Thank you Favor Favor for a wonderful product.”

Customers also shopped for these favors...